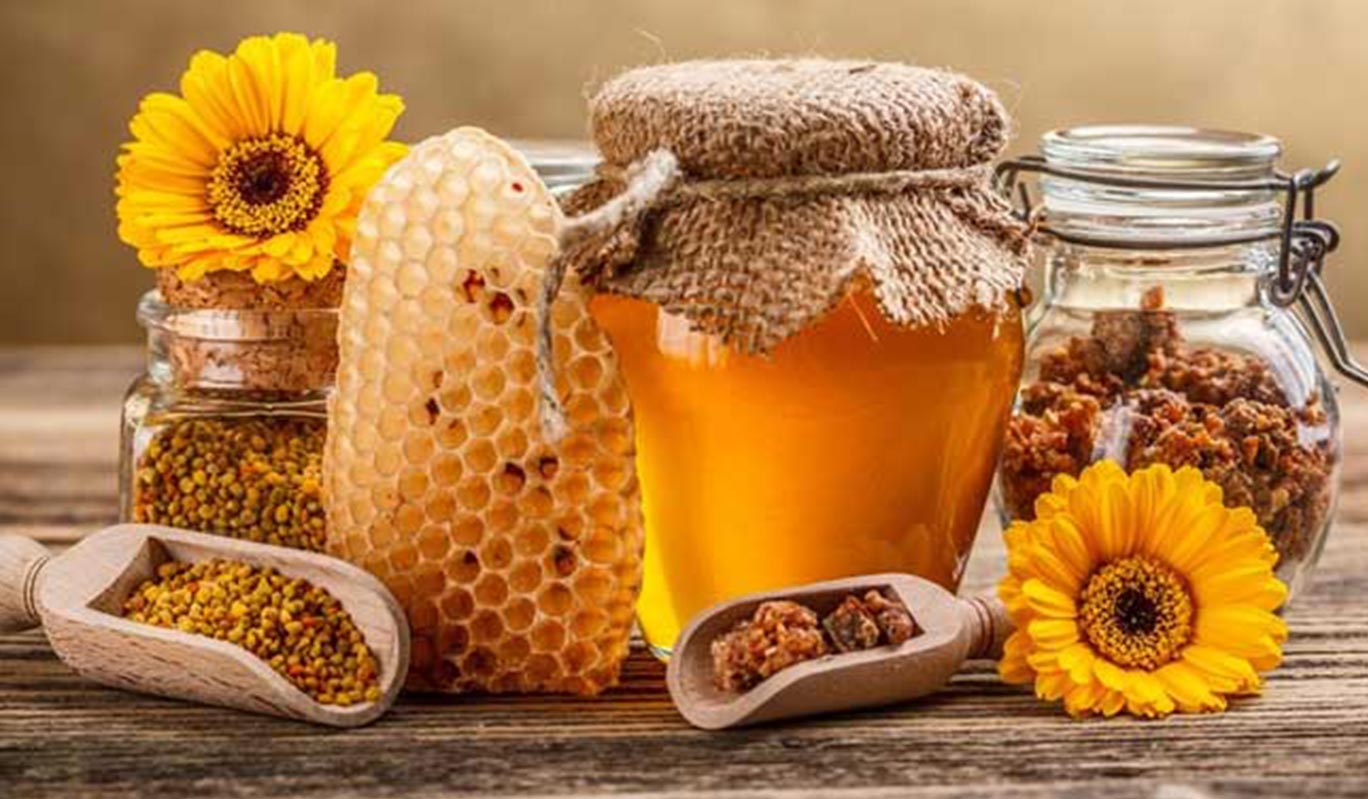 Honey is a natural food produced by bees since time immemorial, even before man populated the earth. Bees appeared on earth 60,000,000 years ago. In Egypt it was the priests who practiced beekeeping, they used honey to relieve gastric pains, vessels containing honey have been found in the tombs of the pharaohs.

Honey is a viscous and sweet liquid, made by bees from nectar derived mainly from flowers, which transports the workers to the hive in their crop, and is stored and matures in the honeycombs, constituting a food reserve.

Honey according to its origin is classified into:

WHERE DOES IT
COME FROM?

It is collected from the honeycombs of trees, naturally formed by bees, located in virgin jungle.

The extraction is partial, leaving a reserve of honey and pollen for the continuity and safeguard of the bees.

It is raw, unpasteurized, unfiltered, or centrifuged, multifloral and wild, containing reverse jelly and pollen structures in honey.

Bee honey is a very complex biological product, the composition of which depends on various factors such as: the breed of bees, the physiological state of the colony, the flora visited, nature of the soil, climatic conditions of the place where it is produced.

The most important enzyme in honey is α-glucosidase, since it is responsible for many of the changes that occur during honey; It is also known as invertase or sucrase and converts the sucrose disaccharide of honey into its monosaccharide constituents fructose and glucose.

The intense flavor, strong aroma and color of wild honeycomb honey depends on the area, type of bee and flowering. In addition, the flavor is unique and unrepeatable since it is obtained from multiple flowers.

The consistency of honey can be liquid or crystalline; Most honeys crystallize over time, and the speed of crystallization is favored by a higher proportion of glucose in its composition.

Crystallization is one of the most important modifications that occur in honey. All natural honeys fully crystallize, in less or more time, with thick or fine crystal size.

Now that we know what raw honey consists of, we can indicate some of its properties and benefits for our body.

It has beneficial enzymes such as amylase, which facilitates the digestion of starchy foods such as bread or rice, as well as preventing indigestion by overeating these types of food. It also contains other enzymes that digest proteins.

Polyphenols, flavonoids, and phenolic acids participate in honey’s antioxidant activity, along with a variety of nitrogenous compounds (alkaloids, chlorophyll derivatives, amino acids, and amines), carotenoids, and vitamin C, which are widely known for their activity. antioxidant; according to scientific studies.

Against oxidative stress and diabetes

According to in vitro studies, honey can fight bacteria such as Staphylococcus aureus. That is why it is used for throat discomforts, since it helps to alleviate symptoms and also helps in its cure.

Due to the amount of antioxidants, it can help strengthen our immune system.

One of the best sources of instant energy: The high sugar content of raw honey causes it to be absorbed into the body immediately and generate energy. The absorbed energy will be used slowly for a longer time. Therefore, it is considered as the best source of energy for athletes. It gives them endurance and strength essential for long hours of sports.

Used in allergy treatment: Royal jelly and bee pollen cause severe allergic reactions in some people. But, real honey does not cause such a reaction. In fact, it is used together with allergy medications, since it favors absorption and also has a curative action to a certain extent.

Against wounds and for healing

It is used to heal wounds, due to the antiseptic and antibacterial properties of honey, it can be used as a topical wound healing cream. An added bonus is that it also avoids the risk of scarring. Therefore, consider applying raw honey if you have a wound on your face or other exposed parts of the body for faster healing and also to avoid scarring that ruins the skin. It also serves as a beauty product that smoothes the skin to make it appear younger.

It is a good substitute for sugar.

Rich source of vitamins and minerals: One of the main benefits of raw honey is that it is a rich source of all essential minerals and vitamins.

Despite the countless healing and / or nutritional properties of honey as a characteristic natural product in many homes, both today and decades past, it can cause bodily disorders as well as gastrointestinal, cardiac, respiratory or neurological problems.

You may also have headache, dizziness, oliguria, tachycardia, and vomiting.

It is recommended not to overdo it in its consumption, since as it is not processed and is pure, your body may reject it.