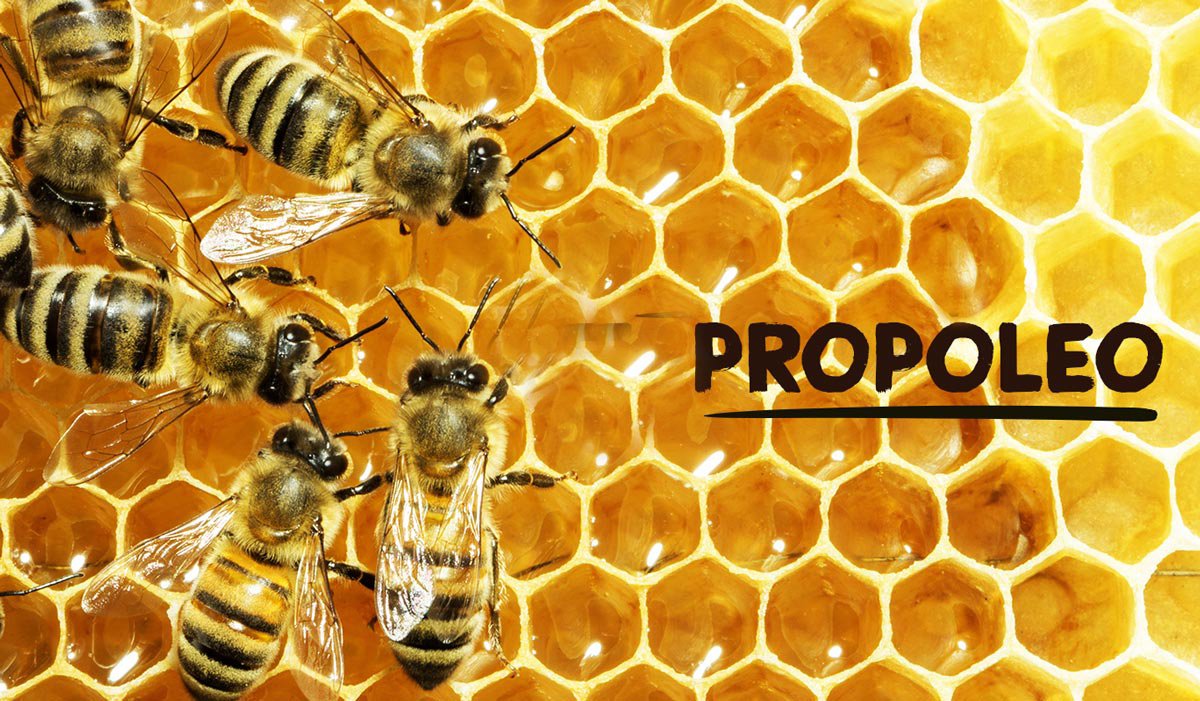 Propolis or propolis, etymologically, is a word that derives from two words: pro “before” or “before” and derived from the Greek polis “city”, thus referring to the fact that this substance is found at the entrance and inside the hive or polis of bees.

Propolis designates some gummy and resinous substances that, secreted by the bark and buds of some plants, are processed with glandular secretions from bees until the final product known as propolis is achieved.

This will be used for different needs of the hive, such as strongly hitting the movable or breakable parts that may fall or avoiding possible infections in the hive, thus constituting a kind of barrier at the entrance to the hive.

The healing properties of propolis have been known since the earliest times. In Egypt it was already used by priests. Later it was used by the Greeks (Aristotle quotes it in his History of Animals). In the Middle Ages, Latin and Islamic cultures used it as a remedy against diseases.

It is also highly valued as a wood preservative. In fact, great masters impregnated their violins with substances containing propolis in order to avoid deterioration. At the end of the 19th century and the beginning of the 20th century it was widely used by military doctors where it had a great application in hospitals in the treatment of war wounded.

It has recently experienced a boom, backed by numerous scientific investigations, which demonstrate the importance of propolis in natural medicines and as food.

The physico-chemical properties vary according to the source of supply. Thus, the color is variable, from light yellow (when it comes from the Conifers), to reddish-brown, almost black, passing through a wide variety of shades.

They exhale a more or less pronounced aroma of honey and wax, and a generally pleasant smell that sometimes reminds us of incense.

The flavor of propolis is more or less bitter. It gives a burning sensation to the mucous membranes of the mouth when chewed in large quantities for a long time.

It is a viscous, sticky, gummy substance, extremely unstable in cold, it begins to soften from 15 ° C, to become viscous from 30 ° C.

Propolis is insoluble in water, slightly soluble in alcohol.

In addition 32 amino acids are present (7 of them essential); vitamin B1 (thiamine), vitamin B3 (niacin or nicotinic acid), and provitamin A.

The active ingredients of greatest scientific interest, of which about 50 compounds have been described, are phenolics such as benzoic acids, cinnamic acids and their derivatives, flavonoids: flavones (highlighting chrysin and mainly galangine), flavonols (mainly quercetin) and flavonones such as pinocembrine.

In 1960 Lavie demonstrated the bacteriostatic activity (inactivates bacteria by preventing their reproduction) of propolis, evidencing a high activity on B. subtilis, B. alves and Proteus vulgaris; medium activity on Salmonella and B. Larvae. Activity was null on E. coli and Pseudomonas pyocyanea. High activity against Staphylococcus aureus. In vitro research shows that it inhibits the growth of H. pylori (the cause of stomach ulcers)

Practically at present, all the investigations are coincident in pointing out that the inhibition of bacterial growth is very high against Gram positive (G +) bacteria, whereas in Gram negative (G-) bacteria, this activity is much lower or void.

Studies show that bacteriostatic activity is more evident than bactericidal action (kills bacteria), since the latter is beginning to be appreciated in high concentrations.

The antimicrobial properties are mainly due to the galangine and pinocembrin flavones, but also due to the benzoic, oxybenzoic, methoxybenzoic, caffeic, ferulic and sesquiterpene acids, their activity is probably due to the synergistic effects of various active ingredients.

A study by the Biochemistry department of the University of Oxford reports that it was cinnamic acid and some flavonoids deactivate the energy of the cytoplasmic membrane, inhibiting bacterial motility, making it more vulnerable to attacks by the immune system and enhancing antibiotics. It is clear that antimicrobial action is complex.

We should also point out other facts such as the so-called “indirect antimicrobial capacity”. This is the ability of propolis to enhance the action of various antibiotics such as penicillin, streptomycin, cloxacillin, and cephradine, among others.

There were studies on its antiviral activity, using polio herpes virus; which propolis exerted its effects both against the viral envelope and intracellularly. This action is probably due to the prevention of the absorption of the virus within the host cell and / or the inhibition of an internal stage during the replication of the viral cycle. The combination of flavonoids, phenolic acids and caffeic acid derivatives showed a synergistic effect.

In patients with buccal and genital herpes simplex, the length of stay is shortened, superinfections are reduced, local symptomatic discomfort is significantly reduced, and even in many patients recurrences do not recur. In these patients, they used propolis topically, which contributes to its immunomodulatory action.

It has shown fungicidal effects by breaking down various strains of fungi, such as candida. Its effect was associated with the presence of flavonoids, which also inhibits their growth.

Its use in inhalations provides excellent results in affections of the upper respiratory tract and lungs (bronchitis, tuberculosis). On the other hand, some works have also been published that indicate the good results observed in the treatment of pharyngitis and sinusitis using extracts of propolis.

The observed anti-inflammatory activity could be related to various mediators of inflammation such as prostaglandins, leukotrienes and histamine.

Most research focuses on an active ingredient chromatographically isolated from propolis called Caffeic Acid Phenethyl Ester (CAPE), which is cytotoxic to tumor and viral transformation but not against normal cells. CAPE is a powerful chemopreventive agent, which can also be used in diseases that have oxidative stress components. The reduction of oxidative and nitrosative stress is essential in suppressing tumor development.

Research teams have shown the antioxidant capacity of propolis, in part due to its flavonoid content. Galangina is a relevant flavonoid and possibly together with CAPE account for the greater inhibitory activity of free radicals. Some other identified antioxidant compounds include ferulic acid, quercetin, and caffeic acid.

Various works show that propolis stimulates nonspecific and specific immunity, both cellular (T lymphocytes) and humoral (B lymphocytes). In mice infected with Influenza A virus and treated with propolis, it was found

Propolis is a therapeutic resource capable of improving many patients with asthma, without side effects. They used it in syrup or mixed with honey. Its use allows to reduce or withdraw another type of medication. It was used alone or in association with conventional medication (bronchodilators). The positive effect in this pathology is attributed to its action on the immune system, but also for its ability to inhibit histamine and anti-inflammatory release.

In healing, there is an increase in the number of mature fibroblasts that synthesize parallel oriented collagen fibers, which would explain why it leaves little sequel, and an increase in keratinization

It is 3 to 5 times more powerful as an anesthetic than cocaine. Several studies determined that an aqueous extract of propolis is a good local anesthetic.

It is a good digestive, against stomach pain, against diarrhea.

It is hypotensive, hypocholesterinizing, has a marked myoarticular inflammatory action. Propolis contains 14 carbonic acids on which polyunsaturated fatty acids and linoleic acid are important for their role in the prevention of arteriosclerosis, in reducing the risks of thrombosis and in increasing the body’s functional capacities.

It inhibits the agglutination of thrombocytes and therefore the coagulation of the blood at a concentration of 0.1 mg / ml.

It has an inhibitory effect on platelet agglutination.

It has also been used in stomatological conditions such as the cure of alveoliths and mouth ulcers, in parodontal therapy, in pulp therapy, etc.

It is a psycho-physical energizer. And it also has a biostimulant and restorative effect.

Increases the formation of antibodies.

About 9 g a day is recommended. For those who have a compromised immune system, they can increase their intake to 12 g per day.

It may also be recommended for children, but the dose should be half that of adults, starting with lower doses up to the allowable dose.

In general, propolis is a well-tolerated product. Studies on the allergenic effects due to the waxes present in these products are lacking. However, cases of dermatitis associated with certain propolis have been reported (Hasan et al., 2005; Gambichler et al., 2004; Kuegler et al., 2005; Callejo, 2001).

The history of cosmetic products confirms that alba wax (beeswax) (CAS 8012-89-3), a product extracted from propolis, produces contact dermatitis. This was verified by cross-testing against propolis. Furthermore, alba wax is used as a food additive, so special care should be taken with sensitive individuals (Jensen and Andersen, 2006).

Some very dark types of propolis should be considered to contain highly toxic flavonoids.

Not suitable for allergy sufferers (to find out if you are, you could try a small area of ​​the skin to see if it causes hives or swelling after a while).

Also, overuse can cause diarrhea.