ORIGIN OF
AGUAJE AND RED MACA

The aguaje is a palm tree native to the Amazon that is distributed in the countries of Peru, Bolivia, Brazil, Colombia, Ecuador, Venezuela and Guyana. It is found in manchales or “aguajales”, it is a multi-purpose fruit, in addition to using all its parts: leaves, stems, seeds, roots and fruits.
Maca is a plant native to the Central Andes of Peru, resistant to hail, frost and prolonged drought. It is cultivated since the Inca period at altitudes between 3800 to 4500 masl. This herbaceous plant, presents not only a high nutritional value but is also valued for its traditional medicinal role.

Aguaje contains phytoestrogens, minerals and vitamins such as beta-carotene (vitamin A), tocopherols (Vitamin E) and ascorbic acid (Vitamin C).
MACA has an important content in carbohydrates and proteins; that of fats, on the other hand, is very small, highlighting glucosinolates, sterols, fatty acids (macaeno) and their respective amides (macamides), alkaloids (lepidilines A and B, macaridin) and polyphenols.

Aguaje has many properties; This is used from the root to its leaves. It is customary to consume the fresh and freshly cut pulp of the tree. It is also prepared as a refreshing drink, as a natural flavoring for juices or to add an exotic touch to salads and traditional dishes. It is used to alleviate the symptoms of menopause and as a purifier.
RED MACA has been consumed for many years for its special properties, used as a hormonal regulator, energizer, revitalizer and producer of resistance, promoter of mental clarity and to improve chronic fatigue syndrome. The population consumes the dehydrated hypocotyls, boiled in water until soft, the softened dough being consumed, and baked goods are also consumed, such as fermented juices, Maca chicha or Maca liquor.

BENEFITS OF
RED MACA AND AGUAJE

Aguaje and red maca can help boost female fertility. The aguaje is a natural reinforcement of the female hormone progestin, which also helps with the symptoms of menopause. Likewise, red maca helps to stimulate the production of estrogens; Both contain the phytoestrogen component, which can be found in certain foods of plant origin.

The perfect combination of maca and aguaje help neutralize free radicals (causing conditions such as cardiovascular disease, diabetes, etc.) present in the blood, acting as oxygen scavengers and not showing toxic side effects.

Studies indicate that the consumption of this combination provides energy, stimulates the metabolism to lose fat and promotes the increase of muscle mass, being attractive for use by those who perform demanding physical activity, such as athletes, of great importance during contraction. skeletal muscle and recovery after physical effort.

Increases the resistance of the organism, maca has great metabolic properties, being able to increase testosterone naturally, and with the intake of vitamins by watering, it significantly increases ATP leading to improved performance.

Based on studies in rats and humans, they indicated that maca consumption prevents bone loss by presenting effects on osteoporosis similar to estradiol, and studies in the Central Andes show that maca users have lower fracture rates than those in the same area than do not consume maca.

Its high content of phytoestrogen, alleviates the symptoms of menopause, also reducing the risk of cardiovascular disease.

Studies indicate that due to the high amounts of vitamin A, it fights malnutrition, being essential for food.

The aguaje together with the maca can act as a shaper of the female figure due to the presence of sitosterol that can be a precursor of the female hormones of the steroid type (estrogen). Women with high estrogen levels are said to store too much fat in their hips. However, there are some women who produce less estrogen and more androgen and tend to store more fat in the upper body. This product is more for the second type of woman. Of course, always accompanied by physical activities.

Due to its content of beta-carotene, which is a precursor of vitamin A, it also helps the immune system to function properly due to the content of vitamin C, vitamin E and carotenoids that have great antioxidant and immune-promoting activity.

Researchers have focused on the health implications to demonstrate its value in treating neurodegenerative, vascular, and muscle disorders and diseases. Energy metabolization and the production of reactive oxygen species appear to help many neurodegenerative disorders and improve the brain’s ability to survive the physical and metabolic trauma associated with these conditions.

To date, no studies have been carried out on the possible toxic effects of aguaje, since it is a fruit of ancient consumption in the Amazon, which corroborates its safe consumption, however, it is known that phytoestrogens in general can inhibit tyrosine kinase receptors, reason why they antagonize the effects of insulin in insulin dependent tissues. With a possible appearance of resistance to the action of insulin.
To date, there have been no reports indicating that the use of maca as food produced adverse reactions in healthy people. However, it has been found that in patients with metabolic syndrome, the use of maca raises diastolic blood pressure. Even so, it is recommended that for the consumption of maca it be previously dehydrated naturally.

It is valued by the Amazonian inhabitants, the fresh fruit is consumed directly and in greater quantities as juice, they consider it a fruit of great vitamin content, in addition to relieving the symptoms of menopause.
It has been valued since pre-Inca times, used as natural energizers in the performance of its tasks, avoiding the fatigue of the daily routine, and increasing resistance in its metabolism.

It is recommended to consume 2 capsules of aguaje and red maca, 3 times a day with food. Powdered, 10g a day, accompanying food. 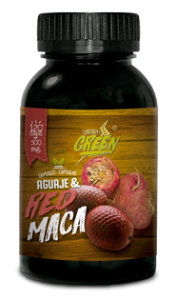 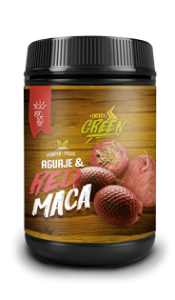 8 thoughts on “AGUAJE WITH RED MACA, BENEFITS FOR BEAUTY AND FEMALE FERTILITY” 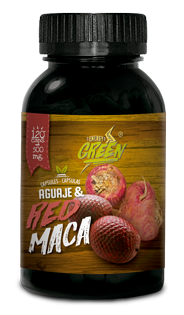 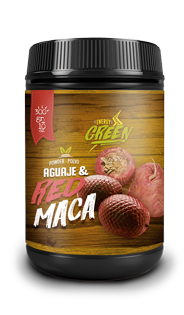